Used to allow users to sit down. Example can be found in the SDK as VRCChair.

This component can also be used on avatars to create seats on avatars!

This component acts a bit differently in VRCSDK2 and VRCSDK3. We support SDK2 and SDK3 stations that have animations to drive either SDK2 or SDK3-based avatars.

There is a new parameter InStation, which can be used to indicate that an avatar has entered a station, but might not have Seated-IK enabled. The Seated parameter is now only true if the Seated property was checked on the station.

The Seated property is used to decide what kind of IK the occupant should get when playing the animation.

If Seated is checked, the standard seated IK is applied to SDK2 avatars. This is where the hip and lower body is locked into place, and the head/hands are tracked.

If Seated is unchecked, the SDK2 avatar plays the animation with no IK applied.

The animation in the station will automatically have Tracking Control applied based on the Seated property of the station.

Additionally, if Seated is checked, a Temporary Pose Space is applied to adjust the viewpoint.

SDK3 stations support the AvatarVersion parameter. It is currently only set by SDK3 avatars (where AvatarVersion will have a value of 3), so SDK2 avatars will remain at the default value (check for AvatarVersion < 3).

Transitions to begin a seated animation should branch on AvatarVersion combined with InStation to begin the custom animation.

The SDK2 branch should apply a fixed seated pose (if Seated is enabled), or a full-body animation if Seated is not enabled.

The SDK3 branch can choose to do any combination of animations, Tracking Control changes, and Pose Space changes that are available for SDK3 avatar. However, there will be no behind-the-scenes State Behaviors applied (which does occur in SDK2 stations).

Note that since the creator decides what type of Tracking Control to apply, the Seated property on a SDK3 station does not necessarily indicate the tracking type on SDK3 avatars.

Our example Seated controllers show this branching behavior and the proper transitions and State Behavior setup for applying a seated animation.

The default VRCChair prefab included in the SDK can be used on avatars to let other players "sit" on you. You can use this to make your avatar into a car, a dinner table that moves around, and more!

When using stations on an avatar that you want to animate on or off, you need to toggle specific objects and components. 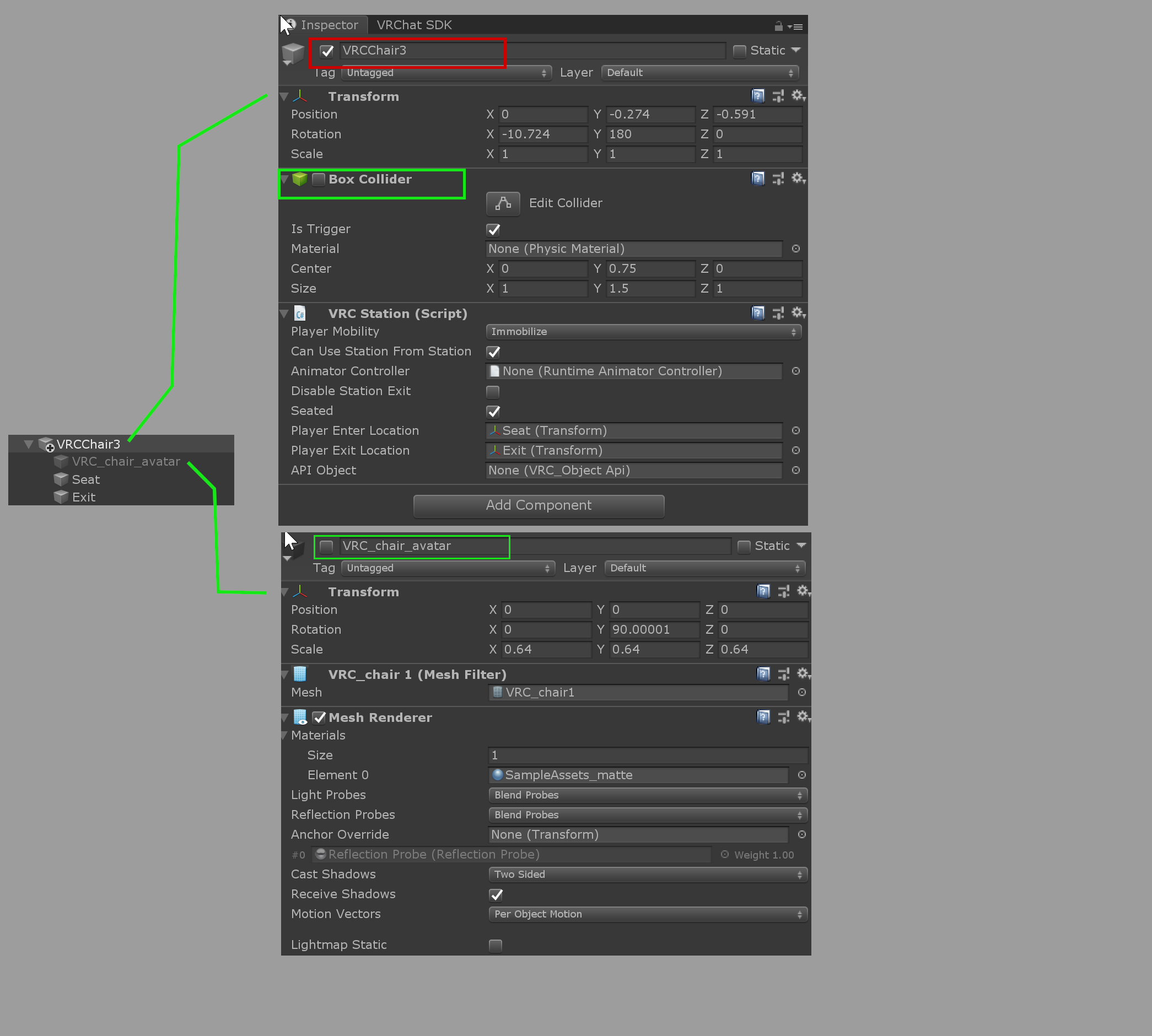 Do not animate or disable the toggle in the red box. Only animate the toggles in the green boxes. Since this involves disabling/enabling components and objects, this must be done in the FX layer.

Attempting to work around this by enabling/disabling a parent object of the chair will also cause problems. You must explicitly animate the objects highlighted above in green.

Keep in mind that having avatar stations on by default (as in, having the green toggles on by default) means that if a user disables animations with the Safety System, the stations remain active, even if the wearer has animated them off.

Triggers available when on the same game object. Only applies when using SDK2 stations.

Actions available via Triggers. Only applies when using SDK2 stations.

Updated about 2 years ago